I got a request from the lovely Miss Pynk two days ago to update (thank you for the encouragement!)  and as an amenable somebody, I decided to acquiesce and put up a post.


I know, I've been a super lazy blogger in the last few weeks and in fact I think the last time I put up a post was over a month ago, but I have a valid excuse. My life has been just cray cray! I've been travelling A LOT, and in addition to this, have had many life-changes occur in the last few weeks. I'm not sure if everyone knows this, but I moved here to Belgium last November, almost a year ago. At the time the move was meant to be temporary, a grown-up (working) Gap year if you will. I wasn't quite ready to move back home to England, and as we still weren't sure where T and I would settle, I decided to do a sideways shift from Paris to Brussels. I got a job as a maternity replacement and a flat for 9months, however as the time slowly elapsed, I realised that I'd probably stay here for a while longer, and needed to look for a new job and a new accommodation. The job search was relatively painless and I soon got myself something interesting, however, the situation on the flathunt front was completely chaotic. I had decided to give up my apartment, and look for a flatshare, because I wanted to save more money so I could pay back my student loans faster, besides, as I was never in my flat #ajalatinz, I thought it made more sense to get something smaller and cheaper.

Easy peasy right? Wrong! From the hollywoodesque flat, with a swimming pool, where the en-suite rooms were bigger than my actual flat, to the super grotty room in the middle of nowhere, I was exceptionally unlucky. As in people would say yes, ask me to come sign the contract, then turn around and send a message retracting their offer. The last one was particularly painful, as I truly believed I had the place, only for the guy to send me a message at 11.50pm on the Wednesday night (I was supposed to move on Friday morning!), saying they'd decided to give the room to someone else. To say I was distraught was an understatement! Anyway, I remembered that I had details for another flat, so I sent the guy a long message explaining my plight and thank God he replied immediately and even agreed to show me the place the next day, Thursday after work. With the money, as well as all my paperwork (passport, Belgian ID card, work contract etc.) in hand, I turned up without a lot of faith, since I'd been burnt so many times. Imagine my surprise when I arrived and met the guy who being in a hurry, gave me a quick 5minute tour of the house, and then handed me the keys just like that. No payment, no paperwork! He was like "we can sort all of that out in the days to come". I'd found something only a few hours before I had to be out of the other place, I couldn't believe I wasn't going to be homeless! I had to stay up all night to pack and clean the old flat, then with the help of my amazing colleagues, moved into my new place at 9.30 the next morning, sleep-deprived but so so happy. That was last Friday, and I have been trying to recover since then, with working the weekend and doing all the admin stuff (medical visits, HR etc.) for the new job.

In other equally exciting news, I got the results of my German exams yesterday, and not only did I not fail, I did well!!! I wanted to get 4s in all the sections, but knew that I was probably realistically only worth 3s. I mean I only started learning in January, by myself, and I'd had moments when I was quite lazy and didn't do any work for weeks. Plus I kept reading online that the people who did well in the exam, often took classes for years, then attended special preparation courses and bought/used the practise books. Me, being a cheapskate couldn't be bothered with all of that, especially since I had already shelled out €175 for the exam and was taking it just "for fun" anyway (other people take it to prove that they have an academic-level grasp of German, for Uni). I sha did my best in the last few weeks, revised a lot and went off to spend 4days in Germany at T's parents place, and hoped for the best. And it worked! I got 4s in 3 of the sections, and even a 5 in the speaking part, meaning that I am now at the upper Intermediate/advanced level, after only 8months of self-study. I achieved the goal I set in January 3months early!!! The best thing about all of this is that the certificate is valid for life, and should I wish to apply, I will be exempted from all German university language requirements forever. Anyway below is a picture of the results, live and direct. 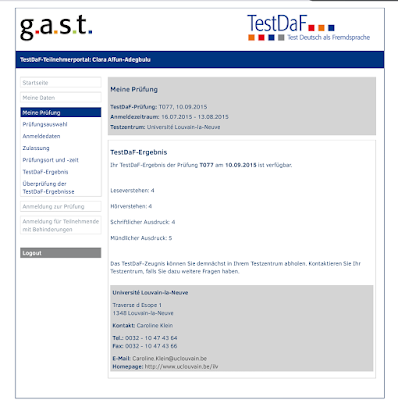 So, I'd like to thank and dedicate this award I mean certificate to T's mum, the person who inspired me to learn German, and the most patient teacher ever. I'd also like to recognise the hard work of Hanna, my language partner who started with me "from the bottom" and accompanied me till I got "here." The poor thing had to deal with me shooting unimaginable grammar bullets at her, but she survived, and made it her job to encourage me at every turn. A huge vote of thanks also goes to Jen and Shahida, my blog readers, Instagram followers and Periscope audience, for the support and encouragement in those times when I was fed up of German and/or lazy. And last but not least, I'd like to thank God, my family, T (side-eye though for the times he laughed at me), the city of Cologne, the German TV channels online, the Conversation Exchange community, my poor colleagues who had to deal with my Franco-Germano-English words and phrases, my credit card for covering the (in no way negligible) cost of the exams, the various restaurants where I met Hanna every week to practise German and sample the wonderful range of Belgian beers, the Belgian train company for not doing their usual thing and striking on the day of my exam and Haribo for making the gummy bears given to me by the MIL as nerve-calming medicine. I will think of each person/party whenever I look at the certificate, and of course you should know that you each own a tiny piece of it ;)

Now I really am motivated to keep improving, plus I need to get back to my Italian. This has reminded me that I CAN do anything I put my mind to!

And, #godwin is definitely the phrase for this week!
Posted by Clara at 09:18